Congratulations to Penny Anne Hoffmann who took out the 'Best Actress' award tonight at the ASIN awards held at the ICON bar. Penny had the award presented to her by her mentor and Australian TV legend Tony Bonner (Skippy).

The 'Best Actor' award went to a very deserving and gracious Criag Ingham. Both Craig and Penny are hard working local talent and were overwhelmed to receive these awards as voted by their peers.

Other awards included 'Best director' which went to David Gould who has just completed shooting his feature film 'The Cure' in New Zealand and 'Best new filmmaker' was Aash Aaron. 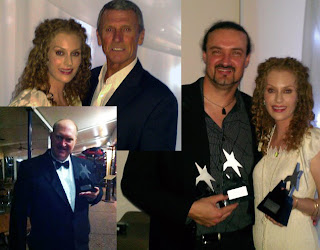 To see Penny and Craig at work check out 'Still Waters' when it is released this month.
Comments
See Older Posts...